Creating fish migration paths across more than 2000 km of waterways.

Australian native fish migrate along our rivers to spawn, find food and shelter, as well as to avoid threats such as drying habitats. The Barwon-Darling and Border Rivers are the main fish migration pathway in Northern Basin.

Fish for the Future: Reconnecting the Northern Basin project seeks to improve connectivity across the northern Basin and deliver ecological outcomes by reinstating the movement and abundance of migratory native fish species.

This major infrastructure program aims to address barriers to fish passage at priority sites across the northern Basin, providing a connected ‘highway’ for native fish to migrate.  Infrastructure solutions aiding fish migration will primarily be focussed on the construction of fishways.

The project will be delivered in stages. Stage 1 is currently being delivered. Stage 2 is in the planning and assessment phase.

The project is funded by the Australian Government and is being delivered by Water Infrastructure NSW in partnership with the Department of Primary Industries - Fisheries.

The Australian Government has provided $56.8 million to fund the project.

The project will generate significant benefits, including:

The proposed works will provide access to more than 2000 km of aquatic habitat in the Barwon-Darling and Border Rivers (Macintyre and Dumaresq).

View a map (PDF, 222 KB) of the proposed project area in the Barwon-Darling.

View a map (PDF, 227 KB) of the proposed project area in the Border Rivers.

Fishways are structures placed on or around constructed barriers, such as dams or weirs, to provide a passageway to help fish migrate.

Find out more about the different types of fishways, or view several fishway diagrams below: 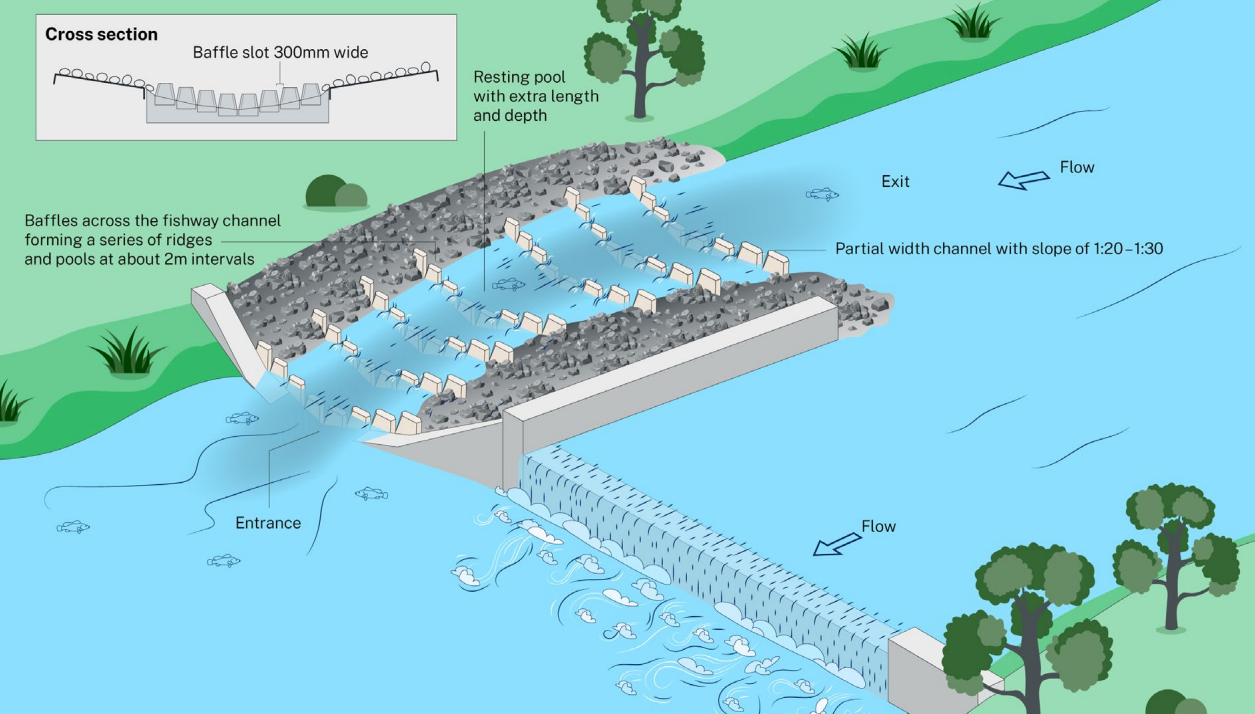 We will provide ample opportunities for local communities and stakeholders to have their say on the project throughout its stages of development and delivery, and this feedback will be used as a key input into project decision-making. Upcoming engagement opportunities will be listed on this webpage and on our stakeholder engagement page.

We recognise and acknowledge the unique relationship and deep Connection-to-Country that First Nations people have as the Traditional Owners and First Peoples of Australia.

The wisdom and experience of First Nations communities will play a critical role in informing our approach. We have a dedicated engagement team who will guide our engagement with these communities, and we look forward to working with them to deliver real, tangible and widely accepted outcomes.